From The Via Francigena - pilgrimage route wiki

The complete route of the Via Francigena (as travelled by the tenth-century English monk Sigeric and his scribe) is over one thousand miles in length, and stretches from Glastonbury in the south-west of England, through Canterbury to France, Switzerland and Italy, terminating in Rome. On the outward leg of the pilgrim's journey, the route taken was known as the "Via Romea" (the road to Rome); but on the return journey home to northern Europe, it was usually referred to as the "Via Francigena" (the Franks' road). Today, the route in both directions is generally referred to as the Via Francigena; even though in modern-day France parts of the road still extant are very often known locally as : "la voie Romaine". (But this could - and very often does - mean any old bit of local highway whose construction is attributed to the Romans. Such 'relics' usually require very careful investigation.) 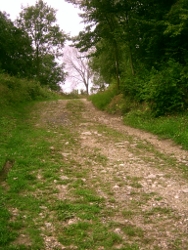 The Via Francigena in northern France

When viewed in its entirety from Canterbury to Rome, the route is striking for the fact that it seems to take a straight line across country for one thousand miles (give or take a little detour around northern Italy and the Po valley after getting through the Alps). It is more than likely that this has been a major trans-European highway for many thousands of years -- certainly longer than the two thousand most pilgrims imagine, since Caesar marched his troops along it to invade Britain. It is even possible that it dates from the end of the last ice-age, some twelve thousand years ago; and has been an important trade route since the very early Bronze Age.

Retrieved from http://martinwheeler.net/VFwiki/pmwiki.php?n=Route.Route
Page last modified on August 21, 2012, at 06:12 PM