How Bill can sort it 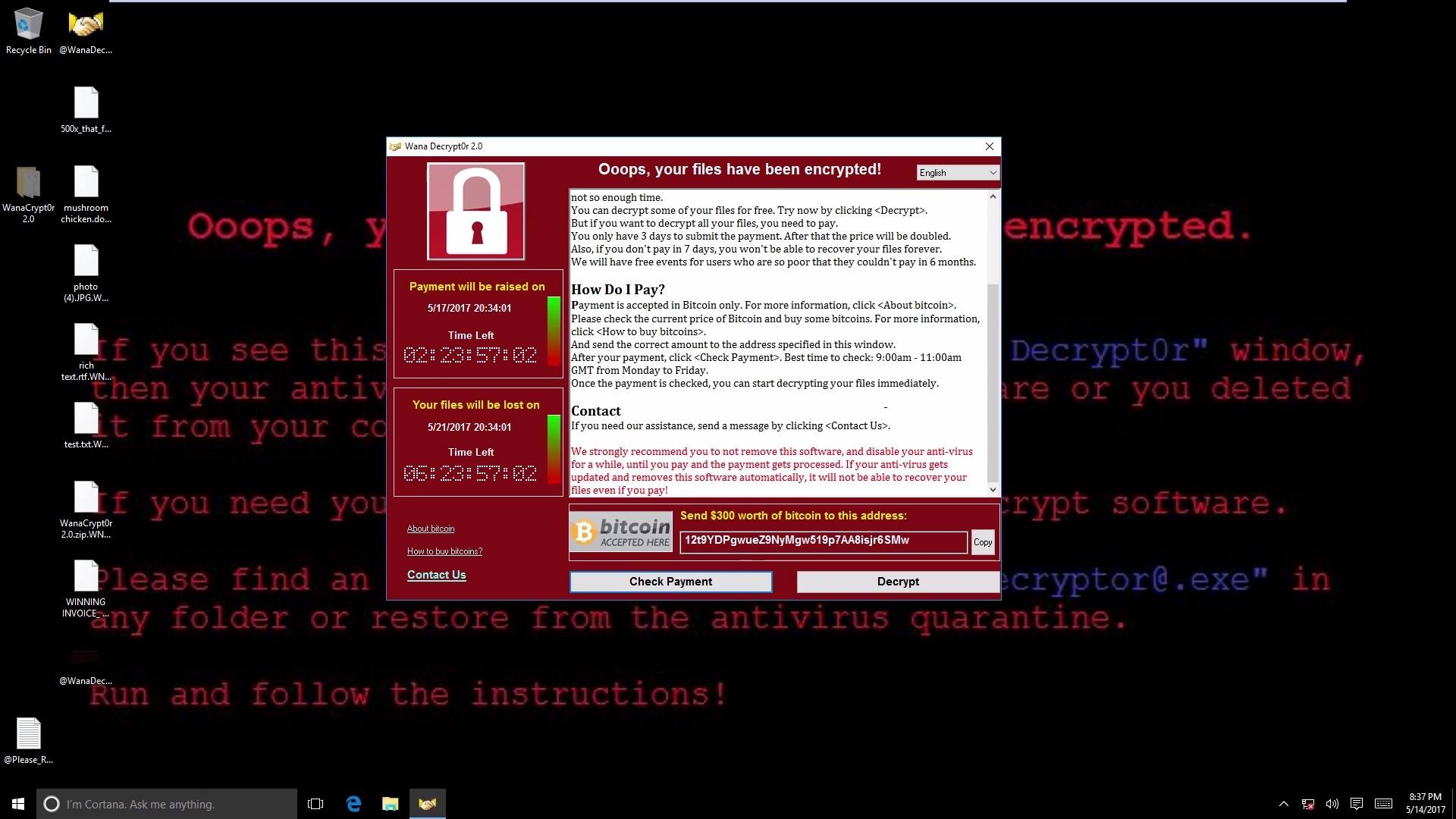 First Microsoft bullies the world into spending good money on buying a well-dodgy operating system with flaws in it; then when that system is used to attack the world, accuses governments of not spending even more money to buy their latest replacement. (Which probably also has flaws in it. We jsut don’t know what they are, yet.)
If it weren’t so genuinely tragic (lives have been put at risk), the situation would be farcical.

For many years now, ever since he quit running the company, Bill Gates has been letting anyone and everyone know that he’s in the running for a Nobel prize, if only the world would recognize what he’s done to deserve it.
(So far : nothing.)

Well here’s an idea :
Why doesn’t he use all that wealth he managed to acquire by acting like the Genghis Khan of the IT sector to now set up an international institution, devoted entirely to ensuring the problem-free maintenance of the global monopoly he is responsible for creating in the computer operating system world in the first place ?
Creating and maintaining a regularly freely updated version of the software the world’s computer users are now almost mandatorily obliged to use ?
Cost-free at the point of consumption ?
And stop charging exorbitant ‘licence’ fees to all and sundry ?
(After all, he’s made enough money at that game already.)

Then he might — he just might — be able to consider himself to have benefited the world in some small measure.

Today’s disgraceful kerfuffle in the British NHS should be a potent warning to anyone concerned with public-facing IT services — don’t ever allow yourself to become dependent on a single (and foreign) source of computer operating system — particularly one as nasty, commercially ruthless and uncaring as Microsoft has proven to be over the years.

Had Bill Gates and his company been Russian, or Chinese, its power-broking ability would never have been allowed to develop (it would have been quietly put to sleep one way or another) — and the means of holding a country (or a planet) to ransom would never have arisen. But presumably because it’s an American company (and therefore eminently acceptable as an example of free market economy), it has been allowed to rise to the position it now occupies. And this despite the strong warnings put out by specialists in the field over the past two decades.

So — despite the now inevitable replacement cost, is it not now time to implement the mandatory use of an open source (and free) alternative to Windows ?

One law for the rich….

So no-one is going to face any charges over manifestly corrupt election practices, eh ?

This can only add to the immense discomfort and sense of outrage increasingly felt by a large proportion of a population which is regularly walked over, arrogantly dismissed, and treated as though their sentiments and opinions were of absolutely no consequence whatsoever — by an appallingly insensitive self-elected group who consider themselves to be some sort of untouchable ruling elite.

This is a very dangerous path to tread.
History shows that the people will only take so much — before exploding into violent reaction.
In this country we are now approaching very close to that point.

As a man who lived through, and shared the pain of a partner who suffered three heartbreaking miscarriages, I find Andrea Leadsom’s smug comments on motherhood offensive; and above all, immensely bitchy. (And I base this not on what The Times reports; but on what I have heard with my own ears, courtesy of the BBC.)

This woman is not only unfit to be considered for the premiership of this country; she is unfit to be in any form of public office — period.
She is better fitted for exchanging bitchy comments over the garden fence with neighbours as mindless as herself.

Andrea Leadsom is a classic example of why menopausal women should NOT be allowed anywhere near political office.

An everyday story of toryfolk….

You couldn’t make it up, could you ?
Send it to Hollywood as a script, and they’d turn it down.

Having campaigned very hard — and succeeded — to needlessly dump Britain totally in the doo-doo, the two principal characters decide they’re now bored with this game; it’s become obvious that it’s not going to advance their own personal interests; so they’re walking away, and leaving it to the people who never wanted anything to do with it in the first place to sort out the unholy mess they’ve created.

And there’s nothing we can do to get compensation.
So for the 65 million of us now so badly affected by their version of ‘jolly japes in the dorm’, all we can do is stand on the sidelines, and wring our hands in despair.

THIS is why Tories should never be allowed into positions of power in this country — they’re so totally occupied with their own personal advancement, and what serves their own ends, that they’re completely blind to the needs of the people they were elected to serve.
“Unfit for purpose” is the least that can be said about them.

The chaos and confusion that David Cameron has caused by criminally walking away from his duty to lead this country as Prime Minister — simply because he can’t be arsed to do what the people have asked of him (after all, he’s an old Etonian, why should he take any notice whatsoever of what the plebs want ?), has to be experienced to be believed.

This country’s governance is now completely adrift.
Not only rudderless, but without a captain.
And to make matters worse, the arrogance of the parliamentary opposition in its self-righteous attitude that what they think, must be synonymous with what the people want, is causing political stresses and strains which are hovering perilously close to those which commonly precede the outbreak of civil unrest.

In reality, the situation boils down to a very simple fact :
What do you prefer in a leader — Policy; or Personality ?

Jeremy Corbyn has bucketloads of very clear and well-enunciated policy; but very little in the way of personality. That’s not his bag.
Borisconi has bucketloads of personality (more than enough to warrant him his own TV show) — but his policies, such as they are, leave a very great deal to be desired. And whether he actually believes in them even himself is a matter for debate.

The Facebook/Twitter generation can see through the now old-fashioned convention of being telegenic; smartly dressed; fake-suntanned; and whatever else the image-makers consider necessary for a politician to be successful. (Think Trump.)
That was yesterday’s thing. Today, what you stand for, what you offer, is far more important to the electorate than how you come over. The new-media generation has very different attitudes from those expected by the pollsters. These days they’re very media-spin savvy; and they can spot a pseud from miles off.

Unfortunately, the PLP hasn’t realised this yet. Bunch of out-of-date fuddy-duddies that they are.

The Kraken has woken (2)

Of course, with hindsight, it is obvious that something new and possibly dangerous to the nation was stirring in the depths when Jeremy Corbyn was so startlingly elected Leader of the Labour Party last year.

When you think about it now, it’s quite obvious that the country was entering into a new political phase. All the signs were there. But at the time, no-one took any notice of the premonitory tremors.

Now we know what was happening.
The proletariat — the deeply dis-satisfied, and utterly ignored working class — had had enough.
Enough of the imposed austerity; enough of being ignored; enough of having no say whatsoever in what happened to the country, or how it was being run. Enough of being imposed upon; enough of seeing a 1% “elite” ripping off the people, making outrageous amounts of profit for themselves, whilst the poor and increasingly impoverished bore the brunt of their selfish, self-interested activities.
And in fact, were treated like just so many cattle.

And so the jacquerie began.
We must now ask ourselves : Where will it end ?
Because if history tells us anything, it is that these immensely deep-rooted outbursts may take a long time to break to the surface; but when they do, once begun they are remarkably tenacious; and astoundingly capable of forcing previously unthinkable change.

Both the Toryfilth and the Parliamentary Labour Party should consider very, very carefully what they are now about to do.

The Kraken has woken (1)

Well, this is exactly what you should expect to happen when you let the Toryfilth “govern” a country.

First, they let a private individual with a personal gripe against Europe define their party policy (and hence that of the country) towards Europe.
Then, they abandon their prerogative to govern in their own name, and allow said individual to insist on a nation-wide referendum — (not even requested of them by the electorate).
Then, when they lose that referendum (because totally unprepared for it — or its possible consequences) they say : “I’m not playing this game anymore”; pick up their ball; and scuttle off to hide in a corner.

THAT is democratically elected representation of the people ?

Just what the hell sort of behaviour are these arrogant monied louts taught on the playing fields of Eton ?