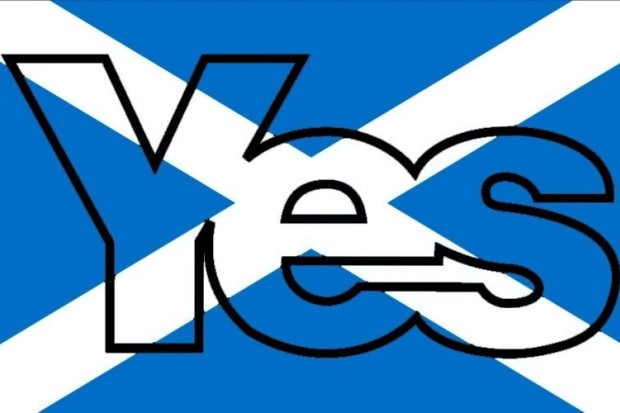 Audio clip: Adobe Flash Player (version 9 or above) is required to play this audio clip. Download the latest version here. You also need to have JavaScript enabled in your browser.

The cynical reaction from Westminster over the last week has been an education in itself as to just exactly how far politicians can be trusted to act in the public interest — and how utterly incompetent, biased, corrupt and self-interested they all really are, at heart.
And how willing they are to act in indecent haste to protect their own all-consuming self-interests, when they — belatedly — realize those interests may, in fact, be genuinely threatened. (Where they’ve been dragging their feet on matters of public interest and social justice for years now.)

It is now plain that whatever the outcome tomorrow, neither Scotland nor England will ever be the same again.
The real loser of course will be Westminster — thank God.
At last — the violent kick up the arse they have been desperately asking for since 1979.

The social tsunami for everyone in the UK has started.

Events are awaited with interest.

Yes, well, that’s a very good description of the state of English politics at the moment. Thank you, Alex Salmond.

The feckless, clueless, David Cameron seems determined to show that he’s no more than a totally incompetent, lightweight, political nobody (who, in any case, most people have already mentally replaced with Boris — it’s just a matter of time, now); and the other two stooges sharing the stage with him are no better.
The current status quo in Westminster is appalling.

Personally, as a native North Briton, and one who spent a considerable part of his life living in Scotland, I hope that the YES vote carries the day next week.
Because when it does, the repercussions on England, and English society will be profound. A YES vote will signal an abrupt — and most probably violent — change in the mood of the country.

And about time, too.

I agree with Chomsky

And I agree with him.
In my opinion, both Julian Assange and Edward Snowden are heroes — NOT villains. And they should both be recognized as such.

[And “hello” to all my regular readers in GCHQ and the NSA. Plus a few others that never make it into the media.]

Ah! The memories of listening to Radio Luxembourg whilst preparing for O-levels in 1957 — Elvis; Buddy Holly; and the Everly Brothers.
Bye-bye Phil — you touched so many lives in that fabulous age, and gave us all so many memories that have lasted us all our lives.
Rock’n’roll wasn’t just a musical movement — it was representative of a new way of being; a new way of living — that belonged to us — the young who wanted a different future from the one apparently mapped out for them.
And we got it. (Whether what we did with it was any good or not.)
And you were one of its icons. Among others.
Thanks.

Bring back the Bradbury

Posted on December 8, 2013 by Martin Wheeler

Well, it would be a step in the right direction, wouldn’t it ?

Every day this week, without fail, I have been inundated with telephone calls from agencies purporting to represent the government, offering to make my home a greener place in which to live.
(This despite the fact that the ‘improvements’ they have on offer to me have already been carried out — in fact, were carried out some years ago.)
So, every day I am unpleasantly woken up by the incessant ringing of the telephone, knowing that the idiot on the other end is not a person, but an unwanted recorded message from the government; and my anger and resentment towards the people doing this to me grows apace.
Is the current government really so stupid as to have not yet learned that cold-calling the public is universally seen as just another attempted financial scam of some kind or another; and therefore most definitely NOT the way to win over the electorate ?

Let’s make this No. 1 — it’s about time the world knew what was going on in the UK.